After usual morning maintenance with a complementary cup of coffee in the hotel/hostel courtyard, we pushed out across the country. El Salvador is a small place 21 000 km sq, about a third of the size of Tasmania (Australian State), so when you ask were something is, the usual response is its a long way away, largo camino. The same applies when someone asks where you have just come from.

It truth the laundry lady two days prior was only two blocks walk and it only took an hour or so to cross across to some Maya ruins we wanted to check out (Tazumal). While ancient, they were nothing to write home about, just a pyramid with some average concrete restoration but it was an insight into what is to come in neighbouring countries, and a perspective of the area this ancient civilisation of the Maya covered.

From here it made sense to do the Route of Flowers, despite being out of season it was a windy road into the mountains. As we made the first substantial climb the weather closed in then from no where, half a dozen “billy carts” came shaking their way down the hill, brakes applied constantly this this was a mean hill.

Who would argue about collecting fire wood if a 3km cart ride on a steep decent was involved!

Over the mountain range we went, wet by this stage due to the scattered showers we encountered but as we rolled into another village, I wondered why the locals scattered for cover as another shower hit.

And then….. Crack! and the skies opened. We thought we knew rain but this was something different. I rode the bike at the nearest awning and stalled as I tried to climb the curb.

This was where it stayed, the handle bars propped against the wall, as within minuted the streets were a fast flowing river and we watched from our stranded situation as those that were to slow struggled.

I imagine an hour passes before we get the opportunity to find some better shelter and change cloths before getting out. The wet season ay! Who would have thought.

From a town called Izalco, I went for my dirt rode fix. Looking at the map it looked as if we could climb past two volcanoes and drop in on a picturesque lake Lago de Coatepeque. Its never exactly straight forward but the result was the same. 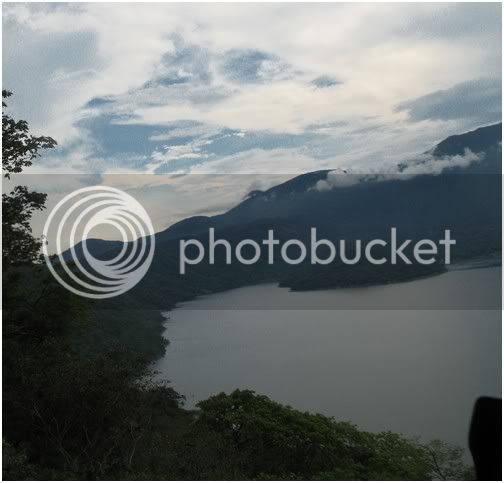 Its a giant creator filled with clear blue water and when we came up and over the creators edge we couldn’t help but stop at the restaurant and enjoy the accomplishments of the day over a typical meal of beans, bananas and a meat…. and two beer for me a rare luxury in these times.

The day began to end so Claudia asked a lakeside resturant as it closed if they had any objection to us sleeping here for the night.

The response was typically positive so we made camp and enjoyed the surroundings.

The police did come past and told us that we should probably get a hotel as it could be dangerous, from drunks they said. It didn’t concern me, its part of their duty to say such things, and when we told them this was normal for us to be camping they retracted a little. It was however enough for Claudia to have a restless night, waking me up at the smallest sound, reassurance usually does the trick.

To the border of Guatemala early the next day.

The plan was to cross into Guatemala with the bike, ride around to the boarder of Honduras nearest the Copan ruins. Leave the bike in Guatemala cross to Honduras and catch a van to the ruins from the border then back in the afternoon.

Success!! No issues, straight forward paperwork, $6 payment and an hour of my life… The way it should be!!

A couple of hours later we stashed the bike at the back of a transport company near the Honduras border of Copan ruins. Crossed as normal people and took normal transport the 15km to the ruins. I adjusted well I thought, despite being two of the four squashed comfortably across the back seat of the van.

Entering the ruins was exciting for me, I studied some Mayan history in first year but naturally forgotten most of it. I do however get easily wound up in the fact that I’m exploring an ancient city and imagine being part of it during its prime.

We were greeted at the gate by this old fella who showed us that there is some real value in the often discarded avocado seed.

Soon the path opened up to the city centre, there were ruins everywhere you looked. Apparently 20 000 people used to inhabit this ancient city. I could imagine them all crowding to watch the regular sacrifice of their favourite sports stars to the gods. They would climb the biggest and most elaborate staircase of their time to meet their destiny at the top of the pyramid in the hands of the societies elite. 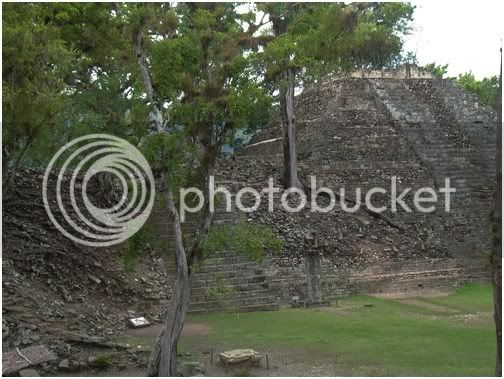 The bike was there upon return, ready to take us to the capital in search for a Mexican visa.

One thought on “Salvadore North to Copan Ruins (Hunduras)”