It was great to finally be in Guatemala, we had heard so many good reports from other travellers, both backpackers and inmates alike.
After seeing Tikal near the Honduras border we made a push for the Capital, Guatemala City, as there was one more visa Claudia required for Mexico.

At this time of year its expected to experience the odd passing rain cloud so here i shimmied up a clothes line in out $40 qutezals ($5) a night roadside accommodation. The string is also used for wheel alignment!

Guatemala City is just another Capital city for me but i did have a chance to clean my temperamental carburettor while Claudia dealt with the visa woes.

When our jobs were complete it was off to the “must see” Antigua. One step closer to accomplishing my Central American goal of seeing lava!!

Antigua was indeed a beautiful place and a chance to alter the diet slightly by indulging some foreign cuisine options. It was a place where we could share a plate of fries with the distant chant of gringos in unison counting to ten in a nearby Spanish school. 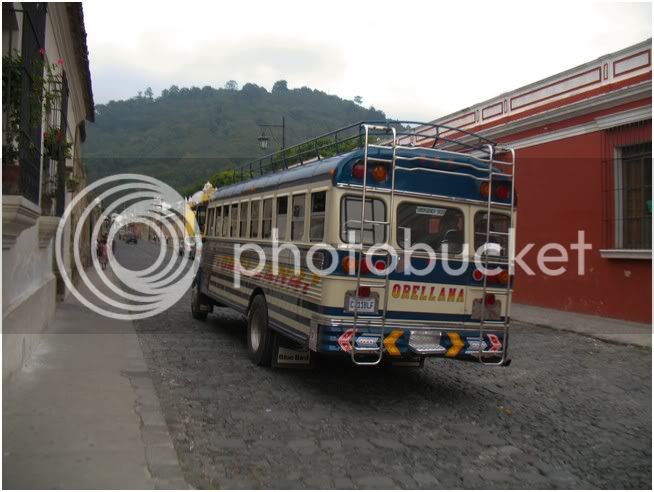 While Antigua was comfortable, it wasn’t my scene. I was chomping at the bit to see some lava, but rather than take a tour we decided to attempt to find Volcan Pacaya ourselves. It was a relativity easy task but rather than leave the bike in the crowd of persistent “want to be” tour guides we found a nearby fenced area where a man lived and minded equipment for a mine. He was happy to keep an eye on the bike while we trekked with excitement towards the volcano.

As the trail went up and over a ridge on the side of the mountain my face felt a wave of head as the adjacent face of the volcano was a series of glowing orange rivers in the distance.

It was awesome, you could get within 2 meters from the hot stuff before your eyebrows began to singe.

I took this small video on ClaudiaÂ´s camera. I was far to close and quickly scampered across the cold lava to get my distance post film. The stories of people being taken by the rivers are very real. A week earlier two people died, guide included. It made me feel a little more comfortable in my decision to not take a guide and rather trust my instinct and luck.

Mission accomplished it was time to descend.