I caused a stir as i rode a little to quickly into the border post. The officials who looked like they hadn’t seen much traffic that day gave me an ear full. I was hugely apologetic, i hadn’t read the situation correctly and thought i was to stop under the awning rather than the Stop sign…. I wont explain the logic.

After a few questions, I was cleared and stamped in. I wondered back to the bike and probably put my documents down on my pannier while I changed my maps over.

Canada ay, should be easy ay.
and i took off… 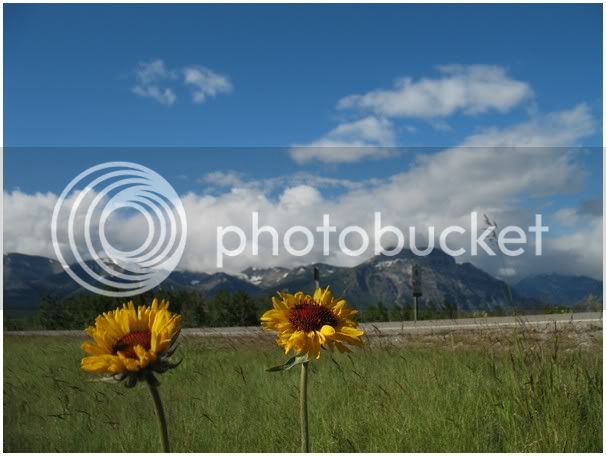 I had forgotten to turn my reserve fuel switch back… and WOW, only just made it to Pincher Creek on my 14 litre fuel tank without even realising it.

That night i camped on Oldman River on highway 22.

It was here that I realised that my passport wasn’t where it was supposed to be!! I panicked and searched everything with no result. It was too late to do anything about it so i went to bed…

As soon as my eyes opened and it was light, i was up..

The little bit of rain we had had after i went to bed had frozen everything. My tent fly was stiff and my seat looked painful. Will was a little angry as he had a case of the frozen frizz, I apologised and started the bike to let it warm.

I started to ride the 100km/60mile back to the border. I stopped at the police station in Pincher Creek but it was still closed. I continued to the border and asked the guards starting their shift for the day.

They gave me some coffee and said I looked hypothermic. This is perhaps an exaggeration, but i was COLD!!

They didn’t have my documents, so we searched my stuff again. I then combed the side of the road and the ditches for 10 miles. The thought was that i had left it on the back of the bike and it had blown off somewhere when i took off.

The search still produced nothing. I went back to town and asked at the gas station and then reported it to the police.

I hadn’t learnt a thing since Mexico, with my passport was my replacement bank card, license and bike registration papers…

I accept all criticism, it is just stupidity to loose something of such significance for the second time!!
It makes me sick!!!

With nothing else i could do, i continued to Banff.
I took highway 22 then went left up past Kananaskis.

This sign was different to most other animal warning signs. It told me that i would see some “Rocky Mountain Sheep” and then, around the corner, I did…

Not the best looking animal ive seen, but they did make me think of lamb…. roast lamb….

Unlike the “Rocky Mountain Sheep” sign, this sign was a blatant lie….
Despite three signs of the same thing, there were none of these type of animals…. anywhere…

I made Banff after being hit by a few small showers and now sit in my friend from schoolÂ´s room, Bryan Williams, typing my report.

As far as my documents are concerned, ive canceled my cards and can receive an emergency travel document in Vancouver, 11 hour ride away. The problem with this is that it is not accepted by the United States… aka Alaska. For a replacement passport it will take 10 days.

I need to have this trip finished by the 21st of July, new passport is not an option. I wont even go to Vancouver tomorrow, instead I will ride towards Alaska aiming for Dawson City.

I don’t have documents so will investigate any alternate option from there. I know there is the Dempster Highway into the Arctic circle within Canada, but this is not my preference….