When i left Bryan in Banff, i felt revived and refreshed. He had given me a jumper to keep me warm and a couple of emergency distress flares to be used in a video further up the road. I was concerned that i wasnÂ´t making the right move going to Dawson City and leaving the prospects of getting some form of paperwork behind…. but all reports said that if any place on earth will provide, Dawson City in the Yukon, would…

The ride was about 2800km or 1700miles through some of the most amazing scenery one can ever encounter..

Lake Louise early on the first morning was a great start…

Then it just continued to roll by..

I camped roadside on the first night, amongst the trees. The bike got stuck in the soft ground and i fantasized about the day i will change my tyre out to the aggressive Dunlop 606 i had strapped to the back of the bike.

I spat my toothpaste out 10 meters from my tent then spent half the night wondering if bears like toothpaste.

In the morning i timed a fuel stop particularly well. It was at a gas works, and after the manager commented on the ruggedness of my bike but then its ability to get to Deadhorse in Alaska, he said i could help myself to the breakfast buffet that had been left over by the companies workers.

The suspension sagged when i joined the road again after devouring an unhealthy amount of bacon and sausages with scrambled egg sandwiches between french toast…. A great and happy start to the day!!

This is where beavers live..

When doing 1000km per day you begin to loose track of how many lakes and rivers you cross or skirt around … but one thing I didnt loose track of is how many of these fellas you see… two… within 20km of each other.

I was the stupid tourist snapping photos and filming from beside the road. When he raised his head and sniffed at me, i wonder if he was thinking about the cans of tuna tucked away in the panniers or the pork flesh that was in abundance on my bones.

Later when i was looking for the sign at the turnoff to the “Top of the world” highway the task suddenly became far more difficult.

Another little lake side campsite..

The following day the bike decided to falter, miss firing then dying completely.. After i went through the spark plug and its system, i gave the CDI computer a wack and it sparked again… When i think back, there is a small chance it was bad fuel and i wasnt grounding the spark plug properly… but the tank and everything was off roadside regardless . 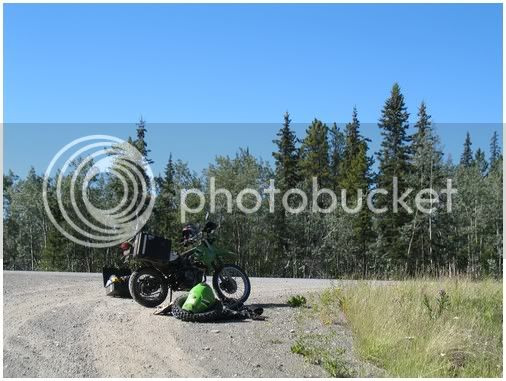 At about 4pm on day three i reached Dawson City. I had conceived an idea in my mind of what i was going to do next. I went to the Winchester Hotel “The Pitt” for a refreshment and began a little background research.

Dawson City… What a place!

That night when i crossed on the free ferry to the other bank of the Yukon river i met Niall on his 2009 KLR, he knew the area and river and supported the plan i had in mind. He showed me to a great free spot to camp and told me where to go looking for more resources in the morning.